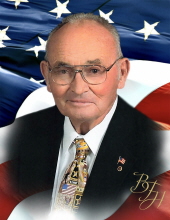 William Edgar peacefully left this earth to go live with his Heavenly Father. Some of his last audible words were "I'm in His Hands."

We are sad he is gone but are blessed to know, because of his faith in the Lord Jesus Christ, his prayers were answered.

Bill, as he was called by many, was born in Durant, Oklahoma to Carl and Emma Edgar. He graduated from high school in Carlsbad, New Mexico in 1956. After graduation, Bill enlisted into the United States Army. Within two years, he had risen to the rank of E-4 and by the time he was 20 years old, he was an E-5. At the age of 22, he was serving in the DMZ line and at the age of 25 he was a Platoon Sergeant.

Bill was recalled to active duty 4 times and received 4 honorable discharges. He served in Korea, Vietnam, the Bay of Pigs, at the Berlin Wall, and during the Cold War. He received 4 Good Conduct Medals, 4 Bronze Knots, a Korea Defense Medal, a United States Army Service Medal, a Cold War Victory Medal, a United States Army Service Medal, and Army Sharpshooter Medals for rifle, automatic rifle, and pistols. After his service in the Army, he attended Big Spring College and South Plains College. He also served in the U.S. Army Reserves for 8 years and was discharged January 1970.

Bill was very active in his community. He served as a Deacon at the Brownfield Church of Christ from 1986 to 2003. He taught Sunday School and he and his wife were adult leaders for the teens at the Family Life for Christ Center. He was also very active in Jaycees as their Secretary. Bill was also a Scout Master for the Boy Scouts, Cub Scout Leader, a 4-H Adult Leader, an FFA Adult Leader. He was a certified Concealed Handgun Instructor, a member of the Rocky Mountain Elk Foundation and an Adjutant for the American Legion.

Bill worked at the U.S. Postal service for 10 years, then he changed employment to Pioneer Natural Gas. After Pioneer, he worked at Energas. He was with Energas (Atmos) for 30 years.

Bill is survived by his wife of 53 years, Judy, two sons, Carl Edgar of Wichita Falls and Paul Edgar of San Antonio, his daughter-in-law Jennifer, his grandchildren, Jillian, William, Makayla, and Trinity. He is also survived by his sister Joyce Phipps, her husband Rondal of Monahans, his brothers-in-law Horace Burnett and his wife Roxann of Amarillo and Gary Burnett and his wife Sandy of Forth Worth, and several nieces and nephews.

Funeral service for William Carl "Bill" Edgar will be at 2:00 pm Wednesday, January 26, 2022, at Brownfield Church of Christ with Bo Shero officiating. Burial will follow at Brownfield Cemetery under the direction of Brownfield Funeral Home.