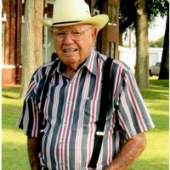 Funeral services for William Thurlow Worsham will be held at 2 pm Thursday, November 30, 2017, at Plains First Baptist Church with Rev. Cleve Kerby officiating and Rev. Patrick Hamilton assisting. Burial will follow in Plains Cemetery under the direction of Brownfield Funeral Home.
There will be a family visitation at the Plains First Baptist Church Parlor on Wednesday, November 29, 2017, from 5 pm to 7 pm.
William Thurlow Worsham, 90, of Plains, Texas was born on September 9, 1927, to Thurlow and Viola Worsham in Tokio, TX. He passed away on Sunday, November 26, 2017. He graduated from Plains High School in 1945. He married Helen Marie Waldrop on January 9, 1950, in Lovington, NM. He served in the U.S. Army in 1953 1954. William farmed for 42 years in the Tokio Community, retiring in 1993. He served on the Yoakum County Soil and Water Conservation District for five years. He was named Outstanding Conservation farmer in 1980. He was a charter member of the Tokio Coop Gin and proudly served as a board member for many years.
He was preceded in death by his parents; a sister, Erma; a brother, Jesse; and great-granddaughter, Randi Jo Albert.
He is survived by his wife, Helen of Plains; daughter, Edith Tuggle, husband, Randy of Plains; granddaughter, Staci Albert, husband, Alvin of Levelland; two great-granddaughters, Shelbi and Kaidi Albert. He is also survived by his brother, Dillard of Delhi, CA; and sister, Faye Shores of Grants Pass, OR; and many nephews, nieces, cousins, and friends.
William was born and raised; farmed and raised his family; lived his entire life and died in the place he loved Yoakum County, Texas.