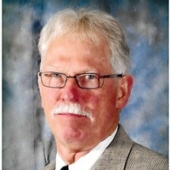 Memorial services for William "Buzz" Timmons will be held 2pm Friday, June 15, 2018 at Calvary Baptist Church with Pastor Wallace Watkins officiating.
There will be a family visitation Thursday, June 14, 2018 at Brownfield Funeral Home from 6pm to 8pm.
Buzz passed away Tuesday, June 12, 2018 in Dallas with his two sons by his side. He was born September 23, 1947 to Roy and Norma Timmons in Brownfield. Buzz graduated from Brownfield High School. Buzz owned and operated Tims Safety Lane and was an ordained minister. Buzz was a board member of the Chamber of Commerce and a member of the museum board. Buzz was a private pilot and a member of the Terry County Airport Board. Buzz helped start the Vineyard Festival, and he helped Terry County Get the designation of the "Grape Capital of Texas". He will be remembered as a great leader of his community and for his love of Brownfield. Buzz always had a sense of humor. Buzz is preceded in death by his father, Roy Timmons, daughter-in-law, Michelle Timmons, and grandson, Hunter Timmons.
Buzz is survived by his two sons, Tony Timmons, Clay Timmons and wife Cara; 2 Grandchildren, Cole and Cameron Timmons; mother, Norma Timmons; brother, Jerry Timmons; and two sisters, Judy Childress and Sherry Hamm.