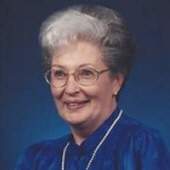 Visitation will be held on Sunday, January 3, 2016 from 4-6 pm at Brownfield Funeral Home.

Wilma passed away on December 30, 2015 in Brownfield. She was born on August 21, 1931 to Orbie and Lena Qualls in Shawnee, Oklahoma. At an early age they moved to Levelland. Wilma married C.R. Lowrance on September 5, 1947 in Spade. She worked as a secretary for Noble Real Estate Agency and also sold insurance. In 1968 she went to work for Texas Highway Department as an office manager for 23 years, retiring in 1991. Wilma is preceded in death by her parents, Orbie and Lena Qualls and a granddaughter Lisa Ann Lowrance.

Wilma is survived by her husband of 68 years, C.R. Lowrance; 2 sons, Charles and wife Sherry of Flint and Michael and wife Linda of Odessa; 3 grandchildren, Kimberly Mayo and husband Rick of Bullard, Chad Lowrance and wife Tammy of Mansfield and Chris Lowrance and wife Cherie of Whitehouse; 8 great-grandchildren, Alexandra Lowrance, Nicholas and Mason Mayo, Brendon, Carson, and McKinley Lowrance, Corey and Candace Lowrance; a sister, Jackie Phelan and husband Carl of Austin and numerous nieces and nephews.